SATURN on the Edge — Vedic Horoscopes 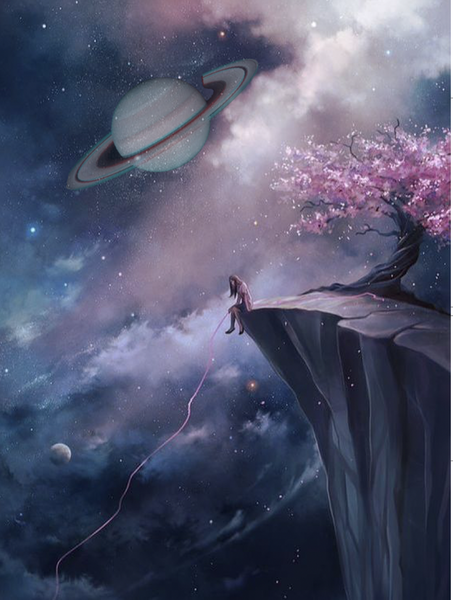 art by Megatruh
Feeling the tension rising? We are at the edge of a tranformative abyss, as the distant ringed planet, Saturn, teeters on the brink of shifting astrological signs.

On October 26, 2017, Saturn, considered the master of universal karma, will end its three-year transit through sidereal Scorpio, and enter fiery Sagittarius, where it will remain until February 2020.

The days leading up to October 26 will be particularly turbulent, especially after October 16, when Saturn enters the final degree of Scorpio. This area of the zodiac—called the gandanta, or karmic knot—hovers on the unstable threshold between water (Scorpio) and fire (Sagittarius). Fire and water don’t mix, and navigating this cosmic threshold could prove awkward, complicated, and ultimately transformative.

Of all the planets in the solar system, Saturn wields the greatest and toughest influence, behaving like a strict parent or a tough boss. Where Saturn goes, serious focus and work soon follows, and this transition will prove no exception.

While the work can sometimes feel uncomfortable or arduous, it is ultimately leading us toward liberation. With Saturn in Sagittarius, the archer’s arrow will be pointed toward downward toward realistic social consciousness and maturity. This is the third and final pass of this volatile transit which has been gaining momentum since January 2017.

In Scorpio, Saturn took the form of the grim reaper (Saturn’s glyph is in the shape of the reaper’s blade – ♄), cutting down all that no longer serves with his cosmic sickle. In so doing, Saturn brought the value of life and an understanding of impermanence to the forefront of human consciousness.

Now Saturn will throw a spiritual hardball into Sagittarius, the sign of optimism and hope. This new influence will knock down those on high horses and shake dreamers awake. There won’t be much room for blind faith, though, because Saturn prefers the sober (and somber), and will demand to see results. Leaders and teachers who don’t “walk their talk” may face consequences in the real world.

These next two years will prove challenging for ethicists and supporters of human rights. The attempt by Congressional Republicans to gut the House Ethics Committee, and the renewal of the US travel ban is a clear harbinger of things to come. Ethical and moral standards will be tested during this period, but through facing opposition, they will ultimately be strengthened and refined.

After the October 26th, Saturn will move into Mula Nakshatra, known as the Root Star, which resides in Sagittarius. Mula is where the galactic center is located, and where the spiral of our galaxy is rooted. In Vedic Astrology, Mula is said to hold the secret of the origin of life, as well as its eventual destruction and transformation. Mula star is at the tip of the Scorpion’s stinging tail where poison is released and deep emotional fears are stirred up, to be ultimately integrated and healed.

Mula is also the area of the sky where a particularly calamitous form of Kali, the goddess of destruction, dwells. Historically, this transit has been seen to herald volatile behavior in the stock market and tension in international relations. 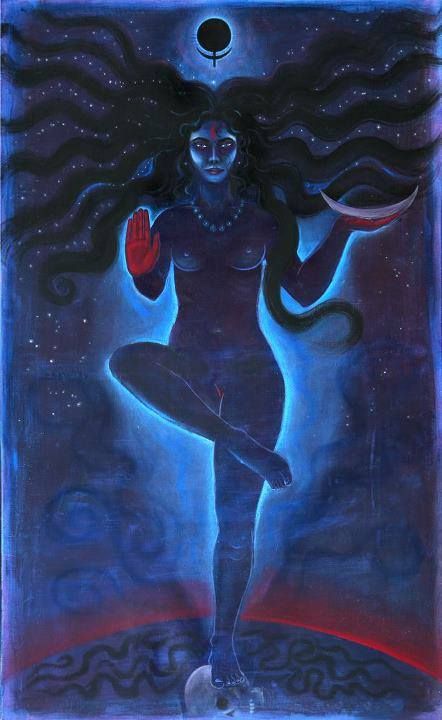 Mula is home of Kali, the goddess of liberation and Nirriti, goddess of dissolution and chaos. Art by Peter Engelhardt
This destructive energy could make it feel as if your foundation is cracking, but use it as an opportunity to rebuild a stronger, deeper foundation from the bottom up. Take a step back, slow down, and assess your life’s path. Seen from the higher perspective, Saturn in Mula offers us the gift of clarity by freeing us from conditioned beliefs and karmic entanglements.

Saturn’s journey into the fire of Sagittarius may feel difficult at times, but keep in mind that its ultimate goal is to liberate us from illusion. Humanity is on the brink of shifting to a higher level of consciousness—but in order to arrive there, we have to walk through the collective fire.

For those of us who are running dasha cycles of Saturn, or who have key natal planets in Mula, the influence of Saturn may be more apparent.

Here is your Vedic Saturn Horoscope for the upcoming three-year transit in Sidereal Scorpio. Remember that these are based on your Vedic Sign. You can look at both your ascendant and moon sign to learn how this Saturn transit will affect you.

**This is meant as a rough guide. Everyone will experience Saturn’s transit in Sagittarius according to their unique astrological chart. A better way to understand the changes and shifts coming up is to schedule a one-on–one Vedic Astrology reading with me here.

Aries – Saturn transits your house of higher learning, instigating possibility for diligence in study and serious spiritual work.  Those in school will have much work to do, try not to overwork yourself.  Be patient and tolerant with father figures and teachers.  Job changes and travel for work are a possibility, work on your commitments to social causes and positive growth.

Taurus – Some ups and downs with money are possible throughout this Saturn transit. Be clear in financial dealings, especially insurance claims, taxes, and shared recourses.  Planning for the long-term future is supported.  Research and diligent inquiry can reveal answers to problems that have long troubled you.

Gemini – Greater maturity in relationship and solidifying commitments are in the cards, if you are ready to do Saturn’s work.  Separation from business partners or spouses may also occur if responsibilities are not owned up to. Learning new communication skills and taking care of your health is advised.

Cancer – This is a great time to focus and improve organization skills. There is hard work with slow, but steady gains. Be sure to get enough exercise and watch your diet. Better health habits may be necessary. Saturn will help you win over competitors and enemies, but other relationships could come under pressure.

Leo – Conservative thinking, especially in investment, is advised.  Working for a purposeful future and having a strong foundation will be constructive in the long run. Children may need more attention.  This could be a good time to dedicate to improving education.  Working for certifications or taking loans for school may be the next step.

Virgo – Things might go a bit awry at home. It could be necessary to spend extra energy on upkeep of real estate or vehicle.  Some financial pressure may occur, but with dedication can find it possible to pay off old debts.  Spiritual healing through dream-work and depth psychology is supported.

Libra – This is a time for recovery and coming back into a sense of self-empowerment.  If you are a teacher, try not to be hard on your students, and if you have siblings be patient with them. Keep your body moving and your words very clear and truthful.

Scorpio –Financial security and responsibility may come more into focus. Working with your voice, improving how you speak and finding your true and authentic voice is supported.  Be sure to eat well.  Mal-absorption of nutrients can be healed through earnest improvement of diet. Remember to love and appreciate your family and all you have.

Sagittarius – These next years could feel like a real transformation.  Saturn’s transit in your sign is a powerful opportunity for spiritual growth and maturity.  Take an honest inventory of your life and get clear with your vision.  Be wary of unrealistic or egotistical tendencies – and don’t lose hope! Be sure to take care of your health and rest more, if possible.

Capricorn – Spiritual and charitable work is supported. Try to take it easy, especially if you are feeling anxious or having trouble sleeping.  This could be a time of closure, such as moving into retirement, finishing up long-term projects, or changing residence.  Tap into your intuition and work on healing unconscious resentment and self-sabotaging tendencies.

Aquarius –Wise, mature and dependable friends are of great importance, others are cut out. Support networks and referral systems grow stronger. Hard work can really pay off in this time, and your career may advance.

Pisces – If you haven’t been feeling satisfied or supported at work, it may be time for a change. There is a lot of work up ahead, don’t overdo it.  What you are doing and creating should come from a place of dignity and self-respect.
0 Shares
PrevPrevious
NextNext

May 15 LUNAR ECLIPSE/Bloodmoon
In Vishaka, star of purpose.

The power of Shadow grows in eclipse season. And tonight, the moon (which represents the mind in Vedic Astrology) is being eclipsed in a rare total eclipse supermoon (bloodmoon).

It’s time to look within. Where are your blind spots? Illusion, separation, and self-doubt are an overpowering trend in these times. This lunar eclipse is an opportunity to drop into your heart and realign with your sense of purpose.

Indra, the Vedic chief of the demigods, and Agni, the fire god of spiritual truth, both rule over this lunar eclipse. Together they burn away the shadows of uncertainty, while stoking fires of conviction and dedication.

My Saturn and Venus in navamsa is ruled by vishaka. Great day but totally done with physical form. High blood pressure. Never had that and intense head spins.

Wahe Guru , what a special ,beautiful day i had🙏🤍

It is definitely making me do this

my star is Vishaka

Too bad it wasn’t tonight. Not a cloud in the sky near Chicago.

Thank you so much 🙏