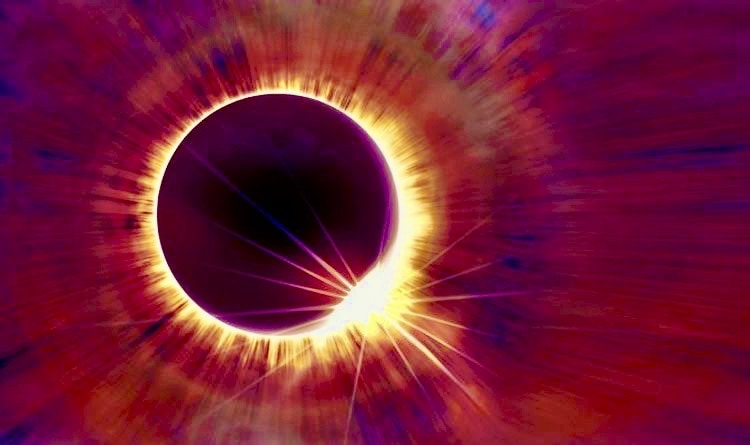 Ready for a revolution? The solar eclipse of June 21, 2020 is churning the collective cauldron of karma, and agitating hearts and minds toward much needed change.

Coinciding with the solstice – the longest day of the year in the northern hemisphere – this ring-of-fire solar eclipse occurs at the apex of solar power, making it one of the most powerful spiritual catalysts in recent history.

With 5 planets retrograde (Jupiter, Saturn, Pluto, Venus and Mercury retrograde) this solar eclipse is signaling a major overhaul of old patterns and out dated beliefs. Seize this rare and volatile time to do inner work and take an honest inventory of your life.

The mouth of the eclipse snake, Rahu, will devour the light of the sun on June 20 (from 8:42 pm – 2:34 am June 21 Pacific Time.) This solar eclipse begins in the area of the sky called Mrigashira, the searching star, and ends in the Lord Shiva’s wrathful star of storms, Ardra.

Sometimes anger must be expressed to solve long-standing problems and motivate for change. Once Lord Shiva’s wife, Sati, threw herself into a sacrificial fire because of her father’s disrespectful and narcissistic behavior.   Lord Shiva’s anger grew uncontrollably and to express his grief and rage, he danced the terrible Tandava that brings all cycles of suffering to an end.

On a personal level, you may have reached a breaking point, a critical turning point, or it may be that things are changing faster than you can process.  Issues of relationships and financial security are under particular scrutiny now, as heart-centered Venus nears the end of her 40-day retrograde cycle.

Venus, the queen of equality, love, and security, is now rising as the independent and self-empowered Morning Star. Venus will set a new tone for clearer boundaries and self-protection in the months to come. Learn more about how Venus Retrograde affects you – Get the Venus Retrograde WebClass – with Venus Horoscopes.

Eclipses can amplify fear and greed, and it’s also said that Rahu holds the venom of racial prejudice. The rare shadow of a solar eclipse crossed the United States from coast-to-coast in 1869, and despite the the 13th Amendment to abolish slavery, the years of Reconstruction (1865-1877) did not end slavery in the United States.  Disguised within Rahu’s ever-shifting power of illusion; segregation, mass imprisonment, and the systemic oppression of black people continues to this day in the United States.

Rahu is a trickster that awakens, but also misleads.  If we are to use the power of this eclipse to evolve and grow, great vigilance must be kept to navigate the many disguises and confusing veils that divide us now.

Luckily, Jupiter is joined transformative Pluto, a positive omen for progress in times of crisis. Expansive Jupiter will back up into sidereal Sagittarius from June 29 – Nov 19, supporting progressive social action and education. Jupiter is tapping into higher consciousness as he rejoins mystical Ketu later this summer, and spiritual growth, energy healing and clairvoyance will increase in the months to come.

While it may be unruly and frightening, the power of this eclipse can help clear away what’s no longer necessary in your life. It’s time to pull skeletons from the closet, and clean the wounds of resentment, hatred and fear. How can you heal the places where your heart has been divided?  How can you help others do the same?