9 ways to call in the Goddess for Navaratri 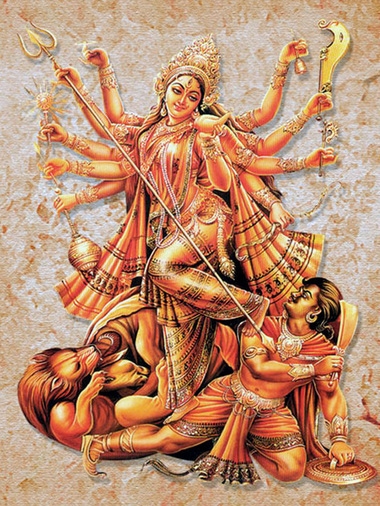 Here is some important information to help you make use of these auspicious days by calling in the power of the Goddess in Her Nine Forms.

Shakti is the power of the “Divine Mother” and the supreme energy that runs through the entire universe. It is said to be the dynamic force behind all of existence. When an overpowering demonic force of negativity rises, it is the goddess who must be summoned because her Shakti is all-pervading and unsurpassable.

The goddess can give clarity and positive direction in life.  She is the intelligent energy of consciousness and she has the power to dispel self-doubt and confusion.   Her influence is called on to clear away deeply entrenched negativity and stubborn diseases.  During the nine nights of Navaratri you can invoke her Shakti to break obstacles and propel you forward.

Navaratri (Nava=nine/ Ratri=nights) always begins the day after the new moon and is celebrated five times a year. The most important and widely celebrated is the Maha Navaratri – the Navaratri of Autumn (Sharadiya Navaratri) which falls in October this year.

The first three nights are in honor of Kali, the “terrible” form of the goddess who destroys the demons of ignorance, disease, ego and selfishness.  She gives strength and motivation, and empowers us towards spiritual growth.

The next three nights are in honor of Laksmi, the goddess of wealth.  She gives abundance, good health and opens the heart to gratitude and generosity. She grants clarity to envision our future goals.

The last three nights are for Saraswati, the goddess of knowledge and art.   She inspires us through science, art, music and education.  She expands the ability to understand systems and to create beauty. She dispels ignorance and grants wisdom.

Each night of Navaratri is in honor of a different form of the goddess.  These Goddesses open particular channels of Shakti on their lunar days (Tithis).   These days can be used to focus on specific life issues.  They have special planetary rulers and there are particular colors that can be worn to enhance the energy of the day. 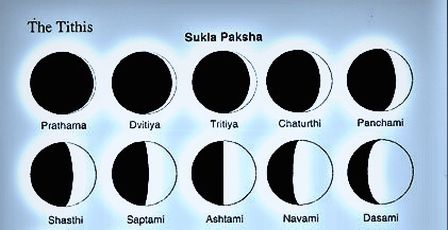 Tithis are lunar phases that change day by day. Navaratri begins on Prathama Tithi and ends on Dasami Tithi.

nine nights of the Goddess 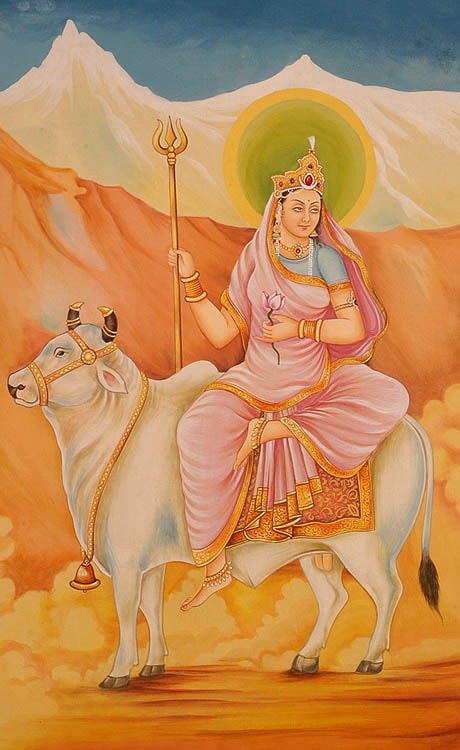 Goddess Shailaputri – “Daughter of the Mountains.”

She ignites the beginning, initiates, and gives stability and power to create.

The daughter of the mountains is Shiva’s beloved Shakti – Parvati. Like Shiva she rides the bull, carries a trident and wears the crescent moon in her hair.

This is an auspicious day to begin a project or commit to an action. She can remove problems that block the successful rise in life.

This Goddess is ruled by the Moon.

Her favorite flowers are Jasmine and Hibiscus. 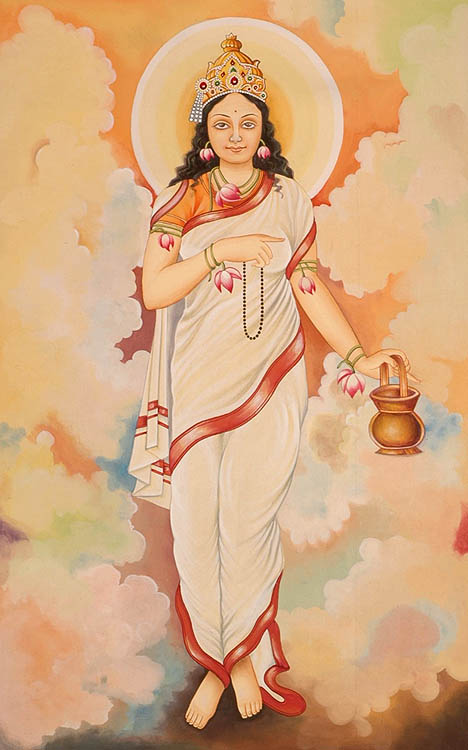 Goddess Brahmacharini – “The One who Renounces”

She gives self-control and helps you to keep promises and stay determined. She gives the power of success in tapas (self-discipline) and is invoked to ensure perseverance and spiritual growth.

Like a sadhu (renunciate) she walks with bare feet, and carries a prayer rosary, and a pot of nectar — symbols of devotion, simplicity and self-containment.

This Goddess is ruled by Mars.

Her favorite flower is Chrysanthemum. 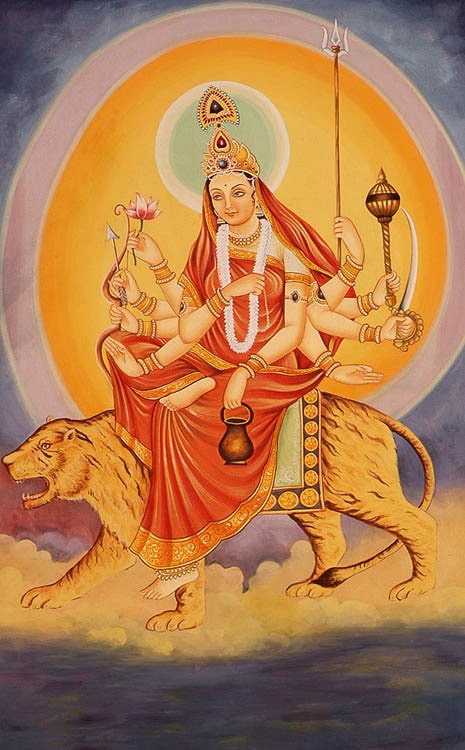 Goddess Chandraghanta – “The Goddess of the Half-Moon, like a Bell.”

This fierce goddess destroys your deepest fears and negative self–beliefs.
She is the destroyer of demons who cause doubt, depression, and anxiety. She gives courage, clarity, and protects from theft and anything that robs you of your vitality and power.

She is sometimes pictured with 10 swords surrounding her and wearing a bell. When she is invoked her bell immediately begins to ring, frightening away all negative entities and filling the subtle atmosphere with her protective waves of shakti.

This Goddess is ruled by Venus.

Her favorite flower is Lotus. 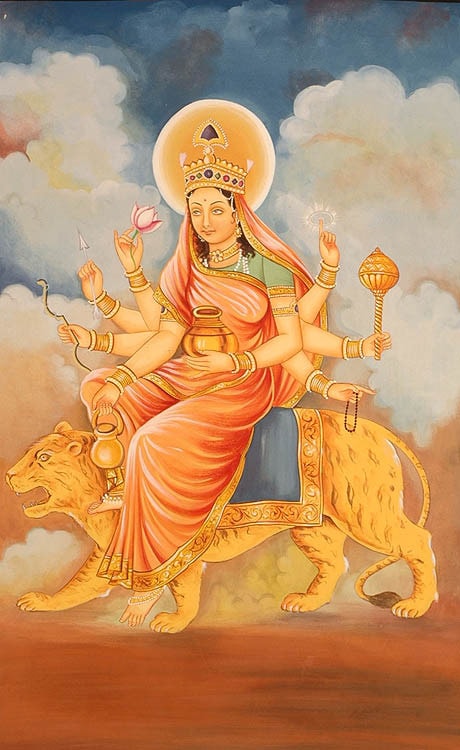 Goddess Kushmanda – “The One who is inside the Sun, or is Radiant as the Sun”

She is adishakti – the Divine Mother who is said to have created the universe with her smile.

Kushmanda is the “cosmic egg,” which sits in the center of the sun and radiates life-giving light.
She is the warmth of the shining sun that gives happiness in love, wealth and good health. She also gives youthfulness and vitality.

This Goddess is ruled by the Sun.

She loves red flowers and Jasmine. 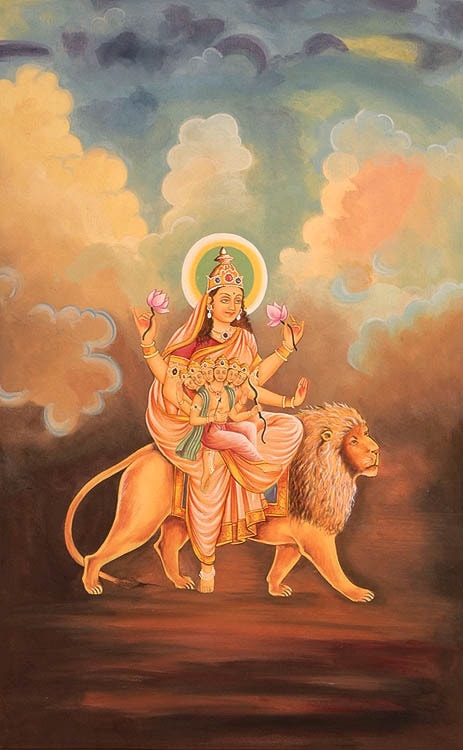 Skanda (or Kartikeya) is Mars, the chief of war who battles the demons of ignorance and misfortune – and Skandamata is his mother.

Skandamata is the power source of the spiritual warrior, she inspires the courage to take decisive action. She protects from inner and outer violence, gives victory over enemies and self-sabotaging behaviors.

Skandamata leads to empowerment and prosperity. She is also said to be the shakti that cures skin ailments.
Her son’s six heads represent the six stars in the constellation of Pleiades (the nakshatra of Krittika) who nursed him as a babe.

This Goddess is ruled by Saturn. 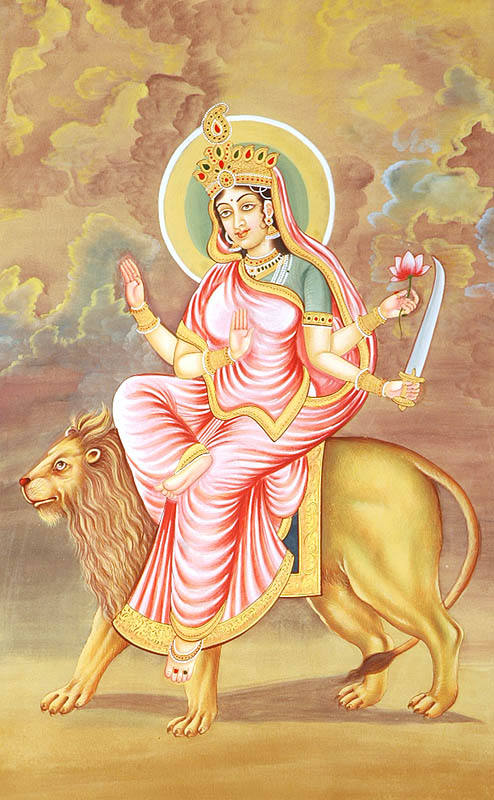 Goddess Katyayani – The fierce form of the Goddesses who annihilated the terrible demon, Mahishasura.

As one story goes, Mahishasura – the water-buffalo demon – had unleashed a reign of terror that no one (not even Shiva, Vishnu, or Brahma) could stop.  After calling on the Divine Mother for help, Katyayani appeared.

When Mahishasura saw Katyayani,  he demanded her hand in marriage, but she told him he must first win her in battle. After a fierce fight, Katyayani conquered Mahishasura and her victory returned balance and harmony to the universe.

This Goddess is often prayed to for love and companionship. She re-harmonizes and balances relationship dynamics by lifting resentment and loneliness, while opening the heart. She heals marriages and removes obstacles that block commitment in partnerships.

This Goddess is ruled by Jupiter.

Her favorite flower is rose. 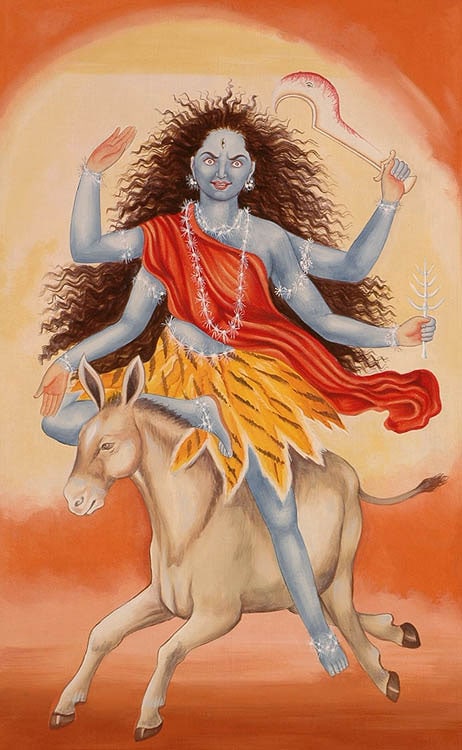 She is the Goddess who rescues those lost in darkness. She transmutes the “shadow aspect” of our personalities into higher spiritual wisdom and compassion. Her terrifying form frightens away all demons and ghosts that cause fear, ignorance, pain, and suffering.

“Kala” also means “time” reminding us of the inevitable passing of time and the impermanent nature of life. Kalaratri can dissolve the fears of aging and death.

This Goddess is ruled by Mercury. 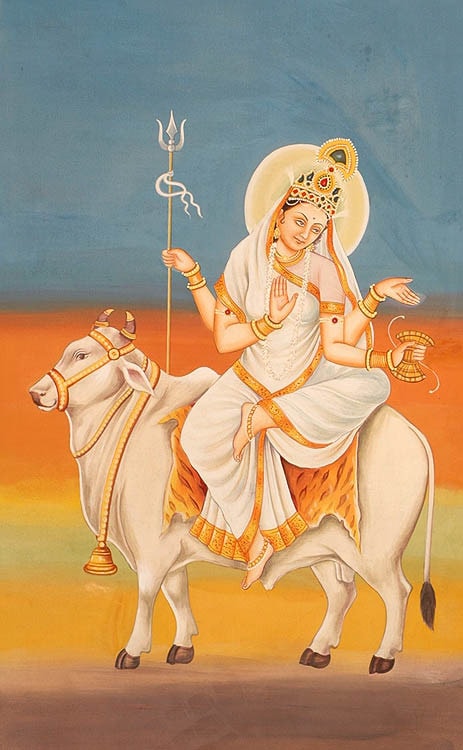 In contrast to her previous form, this is an extremely bright form of the Goddess – The wish-fulfilling Mahagauri of the white snow-peaked mountains.

She is radiant, “very fair,” and like Shiva she rides a bull, carries at trident and plays the damaru (drum).

The white brilliance of her image symbolizes purity and the natural innocence of a child. Her motherly influence is said to be as nurturing as milk is to a baby.
She grants unfulfilled wishes and gives stability to family and community.

This Goddess is ruled by Rahu (North node of the Moon). 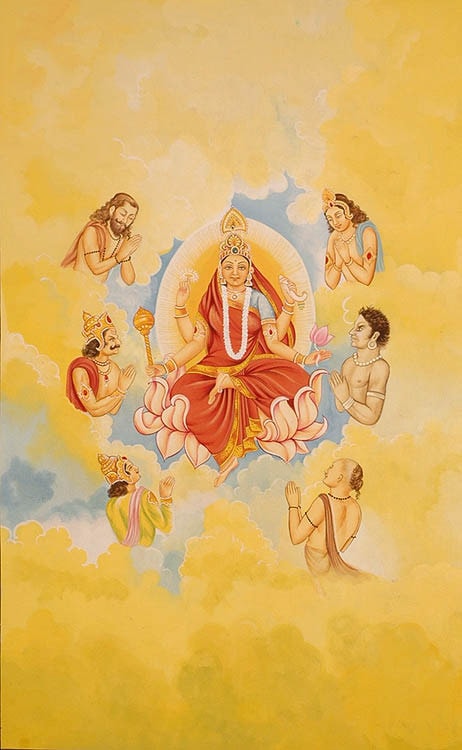 Siddhidatri means “giver of Siddhis.” Sometimes translated as “perfection,” Siddhis are powers that thin the veil of illusion and free us from its entanglement.

The mystical healing powers given by this Goddess are ideal for healers and energy workers. She opens doors of consciousness, enhances intuition and gives spiritual insight.

Siddhidatri is worshiped by gods and higher dimensional entities. Around her are pictured the celestial beings, Dev, Danav, Gandharva, Kinnar, Yaksh, Manav.

This Goddess is ruled by Ketu (South Node of the Moon).

Her favorite flower is champa. 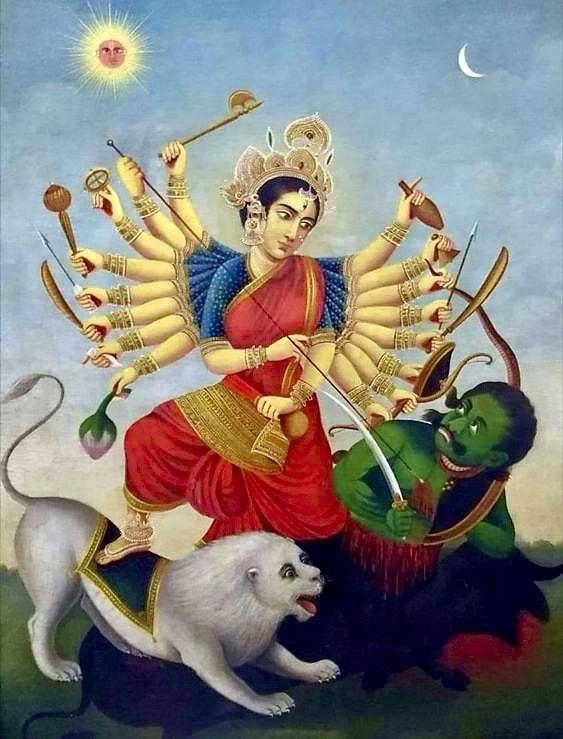 Celebrated as the final day of Navaratri, when the Goddess Durga triumphs over the buffalo Demon Mahishasura.

May 15 LUNAR ECLIPSE/Bloodmoon
In Vishaka, star of purpose.

The power of Shadow grows in eclipse season. And tonight, the moon (which represents the mind in Vedic Astrology) is being eclipsed in a rare total eclipse supermoon (bloodmoon).

It’s time to look within. Where are your blind spots? Illusion, separation, and self-doubt are an overpowering trend in these times. This lunar eclipse is an opportunity to drop into your heart and realign with your sense of purpose.

Indra, the Vedic chief of the demigods, and Agni, the fire god of spiritual truth, both rule over this lunar eclipse. Together they burn away the shadows of uncertainty, while stoking fires of conviction and dedication.

My Saturn and Venus in navamsa is ruled by vishaka. Great day but totally done with physical form. High blood pressure. Never had that and intense head spins.

Wahe Guru , what a special ,beautiful day i had🙏🤍

It is definitely making me do this

my star is Vishaka

Too bad it wasn’t tonight. Not a cloud in the sky near Chicago.

Thank you so much 🙏