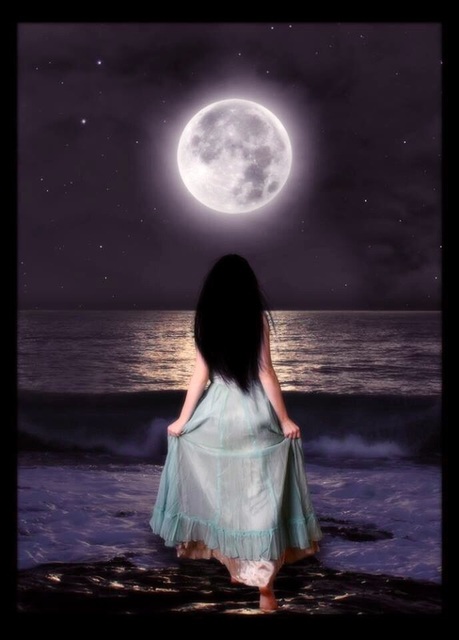 Cut loose and dive in. The lunar eclipse of Sept 16, 2016 is out on the brink of the unknown, asking you to step forward into uncharted territory. Things may seem to be coming apart, but new space for freedom is expanding at an accelerated rate.

This is the final eclipse of the year and marks the end of a six-month cycle of conflicting forces and stubborn obstacles. If you are prepared to integrate the past, the momentum of this lunar eclipse will propel you forward to new frontiers.

The eclipse will occur on the edge of sidereal Pisces in ﻿﻿the area of the sky ﻿﻿known in Vedic Astrology as Purva Bhadrapada.  Symbolized by the front legs of a stretcher or coffin as it carries a body to the cremation grounds, Purva Bhadrapada heralds death and rebirth. This fiery nakshatra may allow you to see what is truly important in life and rearrange your priorities accordingly.

The lunar eclipse peaks at 12:05 pm PT and will not be visible in the United States. 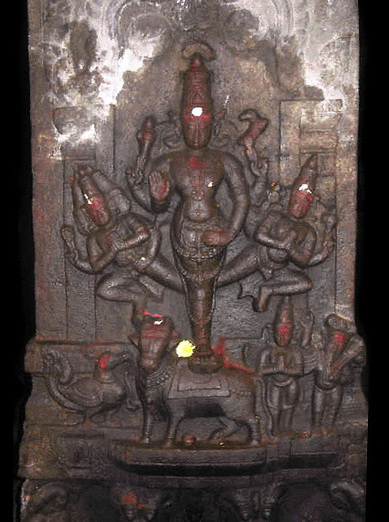 Shrine to Aja EkaPada, a tantric form of Lord Shiva.

Within the fire of Purva Bhadrapa is a tantric form of Lord Shiva called Aja Ekapada (also known as the fire serpent, or the one-footed goat). This deity is connected to the mysterious subterranean naga snakes who sit coiled at the root chakra deep under the earth. Naga snakes are ancient earth spirits who slither through subtle realms and awaken within us the appetite to live, as well as the detachment of spiritual wisdom. The naga snakes are the kundalini shakti that supports and protects all life on this planet.

Like a snake shedding its skin, this lunar eclipse can give a new sense of identity and a new lease on life.  Grace and opportunity may suddenly strike on this eclipse, as Jupiter, the ruling planet of expansive growth is in a powerful direct aspect.  Jupiter channels the potential of this eclipse by granting healthy breakthroughs and liberating stagnate energy.

The grinding gears and heavy weight of this year’s challenges will come to an end on September 17 when Mars officially leaves Scorpio.  Saturn’s harsh pressure will release, and courageous Mars will shift into the free and expansive fire of Sagittarius. Your drive and momentum should pick up even more after Mercury goes direct on September 21.

Take heed however, while the transformative nature of this eclipse might feel exhilarating, it is also well known to create chaos and confusion. A unique three month period is approaching that will magnify the naga snake power throughout the world. A special alignment of planets called Kala Sarpa Yoga, or “The Serpent of Time,“ will entwine around the karmic axis of the eclipse (the north and south nodes of the moon) and amplify the shadow trickster, Rahu.

On a global level this could trigger sudden change, disasters, scandals and deception in the months to come.  The days leading up to the US election – October 27 through November 7 – will be strongly influenced by this Kala Sarpa yoga.

In yoga, the word tapas, which literally translates as “heat,” is often used to describe hard work and disciplined focus. The fiery heat of tapas purifies the spirit by burning away what is unwanted.  Like Purva Bhadrapada, this fire grants strength, clarity, and prepares the soul for the world to come.  If we are ready to take the heat, this lunar eclipse offers a unique opportunity for rebirth.  Like a phoenix, we can emerge from the ashes with a new awareness of personal power and a clean emotional slate.

*To fully understand how these astrological influences affect you on a personal level, book a one-on-one Vedic Astrology Reading with Kari here.

Just got my beach chair out and did some moon bathing ...very nice

Beautiful..FB page - it is possible to have a Chat over the phone. Even .. 5 min - weekend is the best .. have questions- live Vedic Astrology 🙏🙏💕Eva Livingston, Victoria, BC

In Vedic tradition, this full moon is the #SharadPurnima, when the light of the full moon becomes saturated with the nectar of love and renewal.

Moon-bathing is especially beneficial for health and happiness, as is wearing light creamy colors, and cooking sweet creamy liquids and rice (keer).

Liquids and foods left to soak in the moonlight of Sharad Purnima are imbued with its healing powers.

The full moon also marks a stopping point and a shift in direction. Jupiter and Mercury are both coming out of retrograde and new horizons of possibility are opening…

Last day of #navaratri the 9 night celebration of the goddess, when Goddess Durga slays the buffalo demon, #Mahishasura, to restore order and balance to the world. .
Durga banishes the forces of negativity and fear with fierce truth, clarity and courage. ❤️🙏 .

Take a look within. The veil between worlds is thinning tonight. Invoking Siddhidatri “the giver of siddhis,” can enhance your intuition, deepen meditation, and expand your awareness beyond the material plane.

The mystical healing powers given by this goddess are excellent for healers and energy workers.

It’s said that even Lord Shiva acquires his powers from Siddhidatri.

8 #siddhis gained from the goddess-
Prapti : to be able to go anywhere
Prakambya : to manifest whatever you desire
Ishitva : to possess absolute control of anything
Vashitva : to read and influence the mind of others
Mahima : to expand one's body to an infinitely large size.
Garima : becoming infinitely heavy
Laghima : becoming weightless/ to fly

I seek blessings as a woman, a mother, wife, sister, daughter, friend and a healthcare worker. 🙏🏽❤️

Thank You So Very Much!