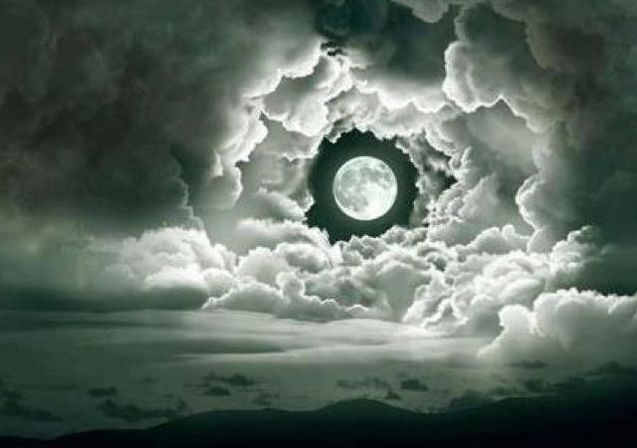 Shining into the deepest night, the full moon of Dec 22 (9:49 AM PT) is at the tipping point between darkness and light. In the northern hemisphere it’s the winter solstice – the longest night of the year – when new hope sparks from the wintry depths of endings and death.  This rare Solstice Moon won’t happen again until 2094.

In Vedic Astrology, the full moon is in the area of the sky (nakshatra) called Ardra, the “storm star,” which is symbolized by teardrops of joy and sadness, as well as nourishing rain.

In the weeks to come, winter storms may be brewing – both literally and figuratively.  Emotions may be stirred up as hearts awaken and passions renew.  This is a powerful time for clearing blockages and opening channels to greater health, happiness, and wholeness in your life.

Know your Vedic Birth Star? Click here to get the FREE NAKSHATRA KEY

Ardra full moon wields the power of Lord  Shiva in the form of Rudra the destroyer, a fierce Vedic god that strikes down disease, fear, and negativity with a single blow of his thunderbolt.

It’s said that Rudra was born from the frustration of the creator, Brahma, who was angry at his children. Karma around your family of origin, whatever level of drama or dysfunction, could be particularly apparent this holiday season. Be patient when dealing with parents and children, as “generation gaps” may seem wider and more frustrating than usual. It’s also important to be compassionate towards those who could feel excluded now.

Take heed, the life-empowering energy of the sun, which is naturally weaker in the days surrounding the winter solstice, is also conjoining the inhibiting force of Saturn.  You may feel more inward-focused at this time. Conserve your energy by getting plenty of rest and staying warm in the weeks to come.

On a positive note, determined Mars enters the spiritual waters of sidereal Pisces now, to create an expansive alignment with Jupiter until Feb 5. The weeks to come will support generosity and open-heartedness, giving a boost to charitable activities and humanitarian efforts.

In the epic Mahabharata, the wise sage Bhishma chose to leave his body at the auspicious time of Winter Solstice.  The six-month period from now until the summer solstice in June, is called uttarayana, when the soul travels the blessed path of heaven.  The pivotal point of this full moon solstice can shift feelings and shake up belief patterns that have felt stagnate for a long time.  Let go of the darkness of the past and open to the light of new possibility and growth now.

To fully understand how these astrological influences affect you, book a one-on-one Vedic Astrology Reading here.