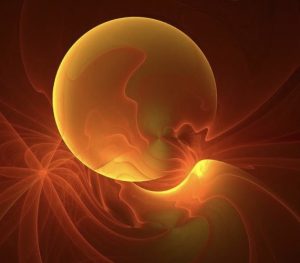 Rage and chaos are swirling right now, and it’s no coincidence that a lunar eclipse is around the corner. On June 5, 2020, the full moon will be partially eclipsed by the earth’s shadow, stirring up anger and resentment, and agitating the collective pain body.

At the same time, this potent lunar eclipse pushes for transformation, helping to raise consciousness of oppressive systems and supporting the cause of personal empowerment.

Eclipses always ignite change, be it on a collective or a personal level, and their effects can be felt in the weeks surrounding them. In this case, the volatility, turbulence, and violence we’re seeing in the United States is coming to a head as the eclipse draws closer.

Falling in the area of the sky, or lunar mansion, known as Jyestha, this partial eclipse—which won’t be visible from North America, but can be glimpsed from most other continents—ignites the courage to surmount opposition, even in the face of seemingly insurmountable odds. A star that resides in the very heart of the cosmic Scorpion, Jyestha promotes concern for social welfare and seeks to free those who are oppressed.

Also called Antares, this giant red star is known as the rival of Mars, and is ruled by the Hindu god Indra, the ancient lord of the skies who wields a thunderbolt as his weapon and rides the wind. With the addition of Mars, the warrior planet, creating an exact T-square with the sun and moon during the eclipse (10:45 a.m. to 2:04 p.m. PT), it’s like a bomb on a hair-trigger ready to explode.

On May 25, the day that George Floyd was brutally killed by a Minneapolis police officer, Mercury crossed into Gemini and entered the mouth of Rahu, the Vedic eclipse snake. This fierce astrological alignment is known to trigger sudden shockwaves of emotion, and Rahu is said to hold collective wounds, especially those involving racial prejudice, political power, and systemic injustice.

Mercury is speeding up the process of human awakening by shaking up the status quo and overturning the old tables of injustice. As Martin Luther King said, “Riot is the language of the unheard,” and Mercury in the mouth of Rahu speaks the language of revolution, crisis, and collective rebirth.

With Mercury positioned at the head of the eclipse snake, be careful not to jump to any conclusions or get into unnecessary arguments, especially online. Information can become distorted and confusing now, leading to futile discussions that devolve into conflict. Rather than waste your energy on digital fights, find ways to channel your rage and frustration into acts of community-building, spiritual practice, and self-care.

On a more personal level, old contracts will be dissolved in the days leading up to the eclipse, and Venus will provide a new perspective on boundaries and commitments. Venus has been retrograde since May 13, bringing up past issues of love and money, and on June 2, she will combust the sun, disappearing into the star’s fiery embers. This is a complete transformation on the part of Venus, goddess of love, and she has the power to rewrite your story on relationships and finances. Learn more about how Venus Retrograde affects you – Get the Venus Retrograde WebClass – with Venus Horoscopes.

Even as chaos swirls, use this Jyestha eclipse as an opportunity to rise up and overcome any outdated belief systems or stories that may have held you back until now. Out of the embers of this fire can rise a new, more just society, and, if you’re ready, a new, more sure-footed you.