5 Powers of the Moon in Vedic Astrology. Why is the Moon So Important? 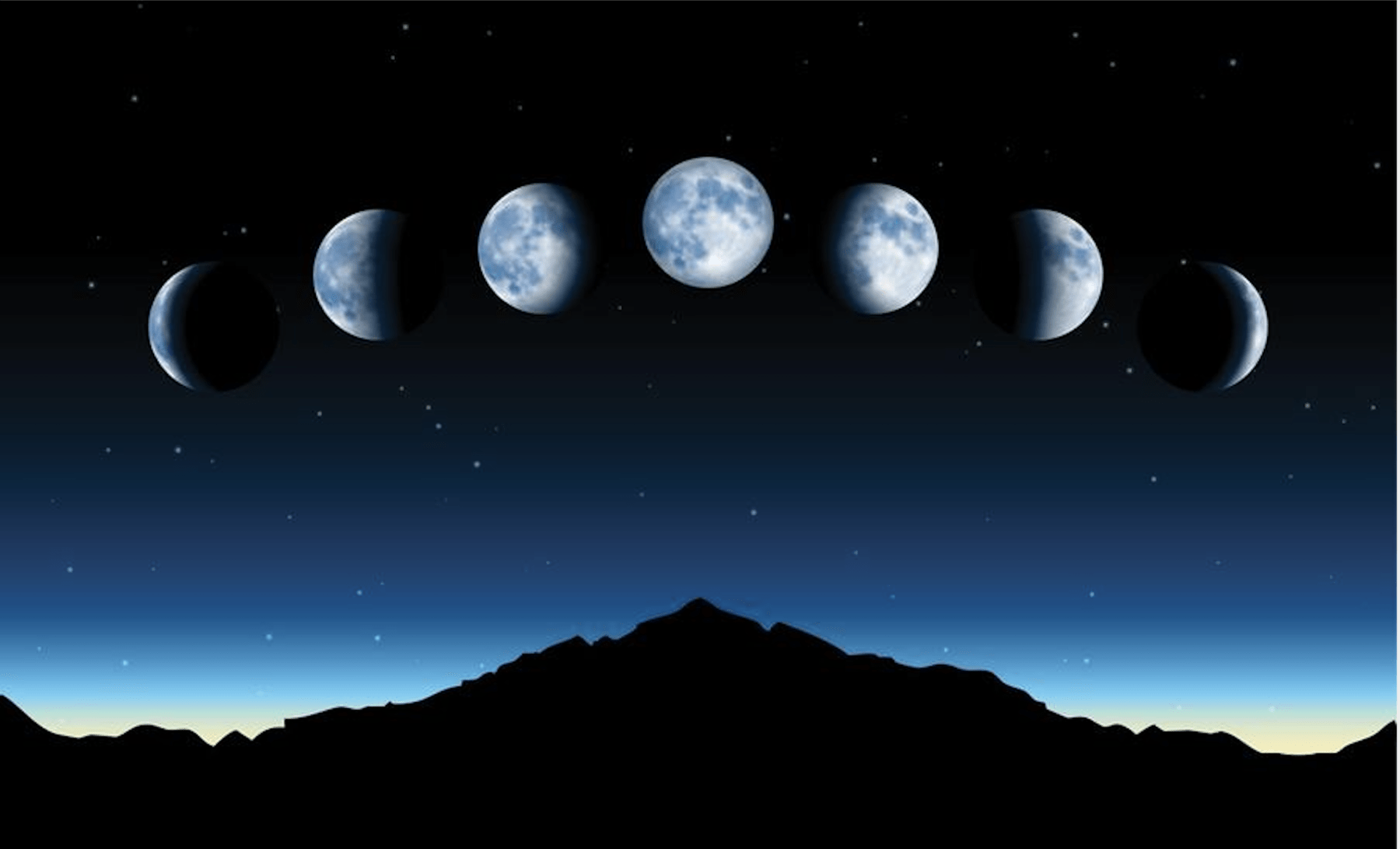 In Vedic Astrology, the moon has vast and expansive powers. Her changing shape and position can influence everything from our moods and relationships, to our career and finances. As we move through our lives, the cycles of the moon can also impart key spiritual lessons.

Considered the divine mother of all life on earth, the moon’s celestial beams infuse us with the fuel we need to manifest and activate our life’s purpose. Like the Hindu goddess Kali-Durga, the moon holds the shakti, or divine feminine energy, that keeps life on earth flowing and moving.

The moon’s rhythm as she orbits the earth is called the lunar cycle, and it regulates everything from the ocean tides and the growth of crops, to menstrual cycles and the behavior of animals and human beings. One lunar cycle is about a month long — exactly 29.5 days (in fact, the word month is derived from moon).

In Vedic Astrology, the moon is said to represent the mind. While the sun—the moon’s opposing pole—represents the infinite and unchanging soul, the moon represents the constant motion of the mind as it navigates the ups and downs of human experience.

The moon and the sun represent not only night and day, mind and soul, but also feminine and masculine. As with most spiritual traditions, in Vedic Astrology the moon is considered feminine. Women throughout history have derived a great deal of power from the lunar cycles, performing ceremonies and rituals timed with the moon’s natural rhythms.

While the moon is considered to have a feminine nature, in Hindu lore she is represented by a male deity, the moon god Soma. Soma is another word for the elixir of immortality that the gods pursue for its rejuvenating properties. The moon is said to contain this life-giving elixir, and her celestial beams shower the earth with nectar, nourishing the plants and supporting life.

Once a month, when the moon is opposed the sun, facing it directly, we have a full moon. This polarity is so powerful that there are birds that sing and corals that spawn only on the occasion of a full moon. The new moon occurs when the moon disappears into the solar rays and conjoins the sun in a divine marriage of oneness.

Following the cycles of the moon can be helpful for understanding aspects of your own life’s journey, and   providing insight into what may be occurring on multiple levels.

5 Key Powers of the Moon

In Vedic astrology, the nakshatra — or Vedic lunar sign — is very important. It determines how a lunar cycle will express itself, and its themes, symbolism, and meaning can set the tone for the entire month to come. The 27 Lunar Nakshatras represent the 27 sections of the sky, also known as “birth stars.”  Calculate your Vedic Birth Star and get a free guide.

The waxing moon supports a positive and upbeat energy that helps projects and activities to succeed.  While the moon waxes, it’s a good time to envision the future, commit to taking action, work on projects, plant seeds, and even cut your hair (it’ll help it grow back thick and healthy!).

The full moon is an auspicious time to launch new projects, gather with friends, and celebrate life. It can also increase fertility — statistically, more babies are born on full moons than new moons. Full moons also offer a burst of spiritual energy that can amplify the power of ritual and prayer. (Tip: If you use crystals, the full moon is a prime opportunity to recharge them in direct moonlight, or in a glass of water.)

Full moons can also create an overabundance of mental and spiritual activity, however, prompting restlessness, insomnia, or irrational behavior. In fact, the word lunatic derives from luna, the Latin word for moon.

The nakshatra, or Vedic lunar sign, where the full moon falls in the sky, is fully charged and expressed at this time.  Calculate your birth nakshatra and get a free guide.

The waning moon is a good time for weeding gardens, cleaning out closets, and disposing of things you no longer need. It’s also an ideal time to cut cords, end toxic relationships, and surrender bad habits. Doing a cleanse, detoxing your diet, and simplifying your schedule are also supported at this time.

The dark moon begins each lunar month on the 14th day of the cycle. In Vedic tradition, this day is known as Shivaratri. The final hours of the dark moon are called Amavasya Tithi, and are associated with Kali, the dark and compassionate goddess of destruction. (Tip: Wear light colors on dark moons, especially whites and creams, to protect the mind from depression and anxiety.)

The dark moon is an opportunity for doing inner work, releasing grief, letting go of the past, and connecting to your ancestral spirit guides. Fasting, meditation, and resting are all supported during this time. It’s said that the dark moon can inspire transcendental visions, prophetic dreams, and deep insight into your past and future.

Jupiter, the brilliant planet of truth and dharma, is now the closest it has come to Earth in 59 years!

This powerful omen coincides with the opening of #Navratri, the 9 nights of the goddess. A portal of healing is opening now, and for the next 9 nights, the nourishing influence of the #DivineMother will grow.

Tonight, we call in the first Goddess: Shailaputri - “Daughter of the Mountains,” the Awakener.

The daughter of the mountain is Shiva's beloved Parvati and the embodiment of Mother Nature Herself. Like Lord Shiva, she rides a bull, carries a trident and wears the crescent moon in her hair.
She represents pure primordial energy that can remove obstacles that block your success in life.

This is an auspicious moment to begin a project or commit to any action.

Follow @anandashree_vedic_astrology for more free forecasts. .
More about the Goddesses of Navratri & check out classes and readings at anandastrology.com -- link in bio

i always look forward to your posts. especially these. the last decade or so? Goddess Divine Blessings, Sister 🙏🏼🌹🌀

🌺🌑🌺 To “The Daughter of the Mountains” Shailaputri, The Awakener. I send you love, reverence and respect as I surrender unto you 🌺🌑🌺

Thank you for sharing these powerful teachings 💖🙏🏽

Thank you so much for this ♥️♥️♥️

The season is shifting.
The equinox is when day and night are of equal length and the forces of light and darkness are in perfect balance.

As the earth crosses this transformative tipping point, it’s said that the veil of the spirit world thins.

It’s also #PitruPaksha, the waning moon of ancestors, which culminates at sunset on Sept 24, right before the new moon. This is the most auspicious window to honor the spirits of departed loved ones and heal ancestral wounds.

Take time to slow down and watch for signs in the next few days.
There is guidance and love standing by.

Book an astrology reading with me at: www.anandastrology.com
Follow @anandashree_vedic_astrology for more free forecasts

is it everywhere sunset 24th or in US at that time?

Thankyou wonderful Kari. Much appreciation and love from Western Australia 💖💛💜

Have shared & linked on theDivineFeminineApp.com - thank you!

Notorious for delays, miscommunication and other unforeseen complications, Mercury Retrograde’s got a bad reputation.

In #VedicAstrology, retrograde planets are more powerful than normal and can help catalyze inner growth.

Mercury Retrograde is now back-tracking through the detail-orientated sign of sidereal Virgo (where Mercury is exalted.) It’s prime time for cleaning up, detoxing, and revisioning how you serve the world.

With Retrograde Jupiter’s gaze on this Mercury Retrograde, there’s an unusual, and perhaps uncomfortable, new perspective opening. Learn and integrate from your past, and try to see things the other way around.

If there’s something you need to revisit, reform, or reconnect with, now’s the time until
Mercury Retrograde ends on October 2.

Note: With red planet Mars conjunct the moon tonight, miscommunications can trigger petty arguments and conflicts. Keep cool and for peace of mind, try gazing at the center point of this Mercury Yantra.

I find it good....go inside catch up with my office work and sorting things out, I like it....

I was looking at Queen Elisabeth's horoscope & found it interesting that Natal Mercury was in her 2 houses conjunct by Jupiter the day she died. Now, the regress Mercury is going to be in exact opposition from the 8th house to her natal Mercury at her funeral. Also, Diana had regressed Mercury in the 8th house in opposition to Natal Jupiter & transiting Uranus when she died. So Mercury regress has some significance in that great soul journey.

My life normally feels like what it feels like when mercury goes into retrograde, so it’s nice when everyone else gets to join the party with me every once in a while 🙂

Thank God this hasn't disturbed me like previous mercury's

🙏Namaste Thank you for this explanation

Is this a yantra useful for Mercury Retrograde?