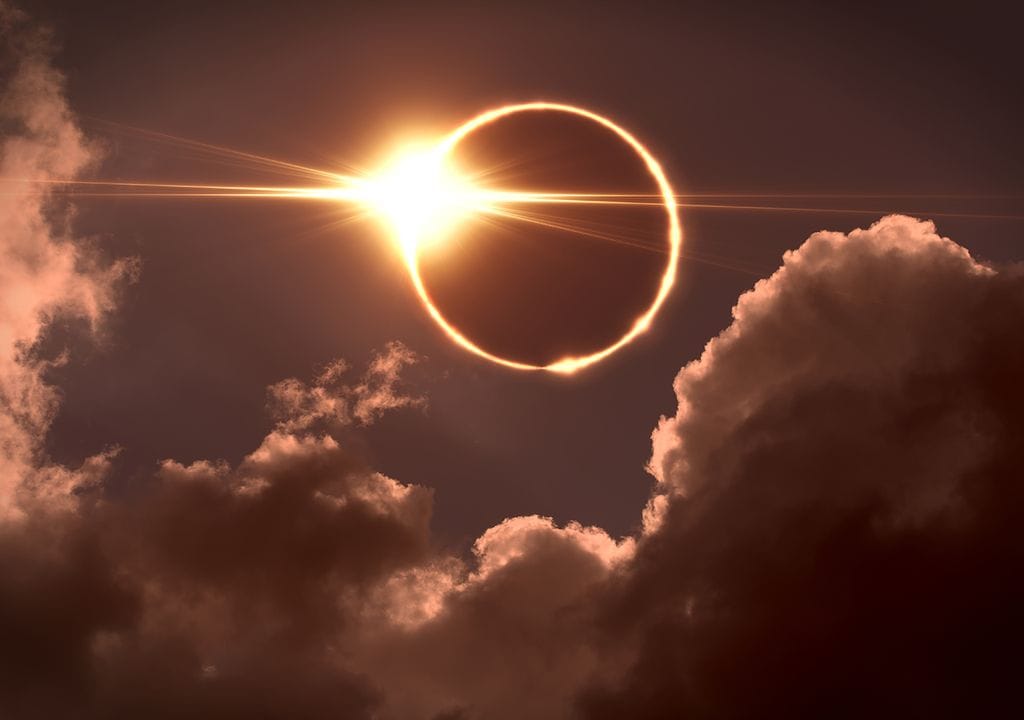 On April 30, a solar eclipse is shaking the inner world, and waking sleeping hearts and souls. This partial solar eclipse is only visible in areas of South America and Antarctica, but the eclipse’s strange and transformative repercussions may be felt worldwide.

This solar eclipse occurs in an area of the sky known as Bharani nakshatra, symbolized by the yoni or womb, it’s also known as “the star of restraint.” Bharani holds the divine feminine life force and the power of sexual energy to heal and regenerate.

Know your Vedic Birth Star? Click here to calculate yours and get the free Nakshatra Key

If you’re ready for change, Bharani solar eclipse is a potent opportunity for transformation. It’s said to be the abode of Lord Yama, the Hindu god of death, who is responsible for collecting and directing souls who have died toward a new womb, and their ultimate rebirth.

This solar eclipse is joined the shadow serpent’s jaws, Rahu, and toxins associated with addiction, co-dependence, and negative self-beliefs may be surfacing.  Use this time to re-direct your life-force toward healing and self-understanding.  The power of mantra and prayer is exponential during this eclipse.

For the next few weeks, expansive Jupiter and passionate Venus are coming extremely close together in the mystical sign of Pisces. They are visible in the morning sky before sunrise, and are increasing intuition, insight, and magical occurrences. Learn more: Jupiter in Pisces 2022-2023 Horoscope Class

From April 29 – May 1, Jupiter and Venus, alongside the mysterious planet Neptune, will be within 1 degree of one another.  According to Vedic astrology, this is called a planetary war (graha yuddha), which can create volatile frictional energy, particularly in the realm of relationships.

Jupiter is the righteous “guru of the gods,” and the teacher of dharma, while Venus is said to be the guru of eternal life and desire.  When these two gurus come together they can empower great artistic expression and achievement, but they can also create over-indulgence, or get swept away by passion.

Venus is described in the puranas as Lord Shukra, who once fell passionately in love with an enchanting feminine spirit (apsara) name Viswachi.  Because of their insatiable love they fell down to earth, and lived and died many times, before Shukra (after much penance to Lord Shiva ) finally gained the knowledge of the Sanjeevini Vidya — the power of eternal life.

This could be a game-changing eclipse in matters of the heart, artistic creativity, and fulfillment in life.  Fated meetings, sudden awakenings, and exciting opportunities are likely.  Take a moment to remember and honor what you enjoy. What makes you feel alive and gives you satisfaction is coming into focus, just be mindful of not over doing it.

Another monumental change occurs on April 28, as the great hour-hand of planets, Saturn, shifts forward into sidereal Aquarius. Saturn, the planet of limitation and structure, is at his strongest in Aquarius, a sign of truth, science and universal law.   Learn more about the power of Saturn in Vedic Astrology —Join my upcoming Saturn in Aquarius Zoom Class – Horoscopes for 2022 -2025

Housed in the area of the sky called Dhanishta, the “Star of Symphony,” this full moon is symbolized by Lord Shiva’s cosmic drum, which he plays while dancing the tandava, the dance of creation and destruction.

This full moon can magnify the healing power of music and dance. All forms of sound therapy are magnified in the days surrounding this full moon, so be sure to chant your favorite mantra or sing your favorite song.

It’s time to get free from inhibition and doubt, and step into the power to co-create this world. Your life is an indispensable part of the divine orchestration. <3

**Watch out for scammers and imposters! I would never direct message you for a reading, or accept money through Instagram.

Offer a flower and make a wish. <3
This Friday (Aug 5) is the sacred day of the wish-granting goddess, #VaraLaksmi.

Laksmi is the goddess of abundance, prosperity and generosity -- and Vara means “giver of boons.”

The boon-giving Laksmi is attracted to clean homes, and true words that are spoken with kindness. Her color is milky white and she loves red roses, lotus flowers, sunrises and sunsets.

In situations of financial insecurity, this goddess offers profound and rapid relief.
But remember, her blessings are not found in the bank alone...kindness, love and gratitude are her most precious gifts.

Thanks for this reminder for Goddess Vara Lakshmi

Sorry I didn’t see this earlier!

There’s a much-needed dose of celestial nourishment around the corner.

Falling in PUSHYA Nakshatra, an area of the Zodiac that's symbolized by a milk-giving udder of a cow, this new moon is tapped into a heavenly source of spiritual and emotional nourishment.

It's also one of the best dark moons for contacting and receiving blessings from the spirit realm. (also called the AADI AMAVASYA)

Try offering a flower or a prayer of gratitude in honor of those who have passed. Offering a flower into a natural body of water (like an ocean, lake, or river) is another healing way to connect with your ancestors.

wow. didn't read that before. I have just came back from the River. I've offered Her my despacho with a couple of flowers 🌹💗

I had an Instagram message from someone impersonating you and I reported their page ..

who is the artist?

So it is dark moon today?