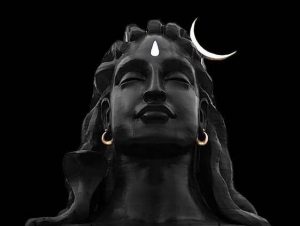 The new moon of Feb 23 (7:31 am PT) offers a potent dose of spiritual medicine. Preceded by the sacred night of Maha Shivarati – night of Lord Shiva – this is a time to slow down, look within, and tap into your inner source of wisdom.

The new moon will be in the area of the sky called Shatabhisha, translated as “100 healers,” or “100 medicines,” this Vedic star can guide you to alternative cures and pathways to better health.  Illness rooted in Shatabhisha is often difficult to diagnose, however if the treatment is applied under its influence the remedy is highly effective.

Know your Vedic Birth Star? Click here to get the free Nakshatra Key

The ancient Vedic god of the sea Varuna, and the ocean-god Neptune, both influence this new moon. This is a potent time to dive deep into the subconscious through guided meditations and visualization.  The healing power of dreams and imagination is strong now.

The Night of Lord Shiva (Maha Shivaratri) is celebrated on Feb 21, when the moon appears as a thin crescent before sunrise. Lord Shiva is depicted with this crescent moon in his hair.  An all-night vigil of fasting, ritual and singing of sacred mantras to Lord Shiva are traditionally performed on this night.

In the trinity of Hindu deities, Brahma is the creator, Vishnu is the great preserver , and Shiva is the destroyer. Sometimes depicted in a wild dance of destruction, Lord Shiva, is also the consummate yogi seated in quiet meditation.

Meditation and prayer on the night of Maha Shivaratri has a special power to dispel the darkness of ignorance and illuminate the soul. It’s said that Lord Shiva’s glance destroys negative habits and beliefs, and that prayers and offerings to him can alter the laws of destiny and break karmic ties.

Take heed, fiery Mars is joining the shadow planet Ketu, the eclipse serpent, in the destructive are of the sky called Mula. From now until March 22, this fiery combination is awakening the snake of transformation. Conflict, political shake-ups, possible violent incidents and earthquakes can easily be triggered now.

Also, Mercury Retrograde , with its typical miscommunications, computers problems, and delays will continue until March 9. This is an excellent time to improve communication habits, reconnect with others, and get retrospective understanding of your past.

Shatabhisha is called the “veiling star” because of its powerful ability to cloak (and uncloak) the mysteries of the subconsciousness. On this new moon seize the opportunity to connect with the spirit world and dive into your inner world.

By offering prayers to Lord Shiva, and by repeating the mantra Om Namah Shivaya, you can accelerate the healing process of this new moon.

To learn more about how these influences affect you, book a Vedic Astrology Reading.